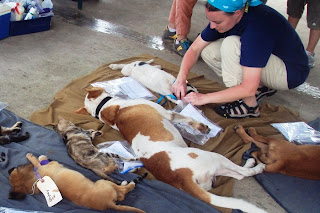 Just after college I moved home, and there was one Friday night where the planets aligned and I wound up sitting on the couch between my parents watching crime shows on the Discovery Channel. The night was only memorable for the show’s frequent use of the term “cadaver dog,” which they were using to refer to a dog who seeks out dead bodies, but which also kind of sounds like the crime scene investigators brought in a bunch of dead dogs. Our pet dog Maggie was sleeping in front of the TV at the time, and my dad all of a sudden pointed and said, “Look! Cadaver dog!”

I spent today with a bunch of cadaver dogs. The Animal Protection Society of Samoa (APS) is having a bunch of free de-sexing clinics all over Upolu because a bunch of American veterinarians are in town. Hanna 79, who works at APS, has been talking up the event since January, asking around for volunteers to come and help facilitate. The visiting vets are from an organization called Animal Balance, which promotes balancing populations of animals in the developing world—in part by spaying and neutering.

I was supposed to volunteer at yesterday’s clinic in Vailele, but when I called after school to confirm my ride out there, the lady told me the village had overestimated the number of cats and dogs, and they weren’t busy enough to need me. But this morning she texted to tell me to come and work at the clinic behind the Samoa Tourism Fale this afternoon.

APS has been promoting the event in newspapers and on TV, so there was a sizable crowd when I arrived this afternoon. In addition to offering free spaying and neutering to anyone who brings a pet, they’re also having teams go out into the streets to catch feral animals and bringing them in.

Since I came relatively late in the day, I was delegated duties in the recovery “ward,” which was really just a small piece of ground with blankets and passed-out dogs lying all over the place waiting for the anesthesia to wear off.

Benj 78 came in from one of the feral dog expeditions, and told me it as a lot of waiting. From what I hear, they’d get hold of a dog, administer a tranquilizing shot, wait for the dog to pass out, and then put it in the van.

Despite the waiting, his job seemed much more exciting than mine. In Recovery, I sat around leashed to cadaver dogs, which feels a little absurd. I’d swat flies and give the occasional gentle noogie, but in the end, it was just as you’d expect: taking a feral dog on a walk and having him sleep through the whole thing.

At one point in order to hold on to both dogs I’d been charged with, I had to stand. This felt ridiculous until one of them, the feral one, woke up and immediately sprang into action bucking the leash and pawing at my leg. That was all my work for the day.

I almost broke a sweat. 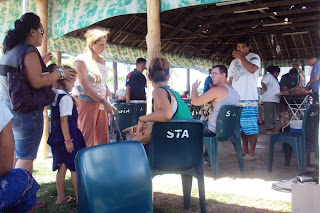 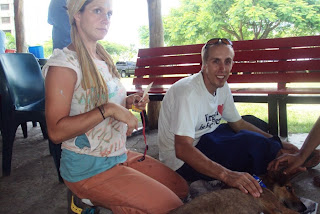 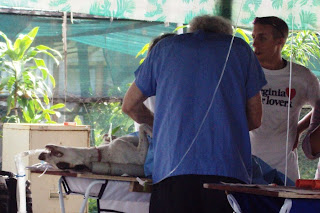 Dog on the operating table. 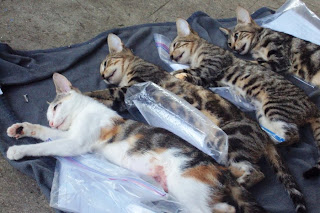 Omgee!
When i saw the first photo I though it was a morgue for animals! . lol .
Funny account though ..

I think it's uncool to name a post "Cadaver Dogs" and then start with a picture of dogs that look dead. Especially that little brown puppy looking one. No one wants to see dead puppies.