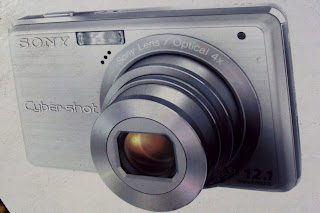 It’s no secret I haven’t had the greatest luck with cameras in this country. In fact, the bad luck starts before I arrived. My sister bought me a Sony Cybershot before I left San Francisco, but only the battery pack and the charger made it to Los Angeles; I had to stop at a Target to get one before I left, and the original had to be mailed to Samoa. This actually worked out well because halfway through training I had my Sony Cybershot in the pocket of my ’ie when I sat on it or laid on it or something else happened and the viewfinder cracked. Since then I’ve had a camera stolen, another left in a taxi, another float away in an ocean current, another get kicked off the dock at Lusia’s (I got the first two back.).

All of this ran through my head this morning when one of my students, my top year 13 Amanda, sat down at my desk and said in an overly respectful tone, “Mister, I’ve got something to ask you.” I waited. “My mom graduates tomorrow, and she wanted to know if we could borrow your camera to take pictures.”

Amanda’s mom used to be on the faculty at my school, but she left to get an advanced degree at just about the same time I arrived. She came in as a long-term sub for a while last year, and I’ve run into her at meetings and functions since. Whenever I see her, we have the same conversation where she asks how Amanda’s doing in class, and I give the same glowing progress report. But I don’t mind it. Amanda’s great.

I wouldn’t say that it was difficult for me to entrust Amanda with the camera in spite of this; I would say the only reason I even considered lending out my camera is because of Amanda’s track record and because I know her mom. If almost any other student approached me to ask about the camera, I’d have turn him/her down flat out.

In the past I’ve found that only a slight amount of resistance on my part usually deters a person from asking to borrow the camera. A long stare and a long “Hmmmmmmmmm” usually do the trick.

I lent the camera out once before. I let a staff member borrow it for a couple hours on Friday afternoon. She returned it on Sunday. I was perturbed.

I gave Amanda the stare and the “Hmmmmmmmmm”. It rolled right off her. Really, I should have just said no outright, and it would have all been over. It was too late. I was mulling it over.

Frequent readers will remember I have a soft spot for family photos, and the debate in my head was pretty short. Sure, there’s a risk I’ll never see the camera again, but on the plus side, what a great role model this mom is to her daughter, and why should there not be pictures? That stuff about it being the mom’s idea to borrow the camera was a bald-face lie. Amanda had come up with the idea most definitely. She wanted to take pictures of her mom. Who wouldn’t?

I lent her the camera. I cleared my pictures off and charged the battery and showed her how to keep it on “auto”. The one condition was she needs to return it to me by tomorrow afternoon.

I’ll probably get it back next Tuesday.

You are a kind soul Matt. I hope to read the camera lending has a happy ending for you.

found your blog through pcjournals - i'm a volunteer in macedonia & am really enjoying reading about pc samoa.

around dec or january my family invited me to a graduation in june, but it was kind of a joint invite for me & my camera. by joint invite i mean that it was my camera that was invited, but i'm allowed to tag along as the only one who knows how to work it. hope yours makes it back intact!