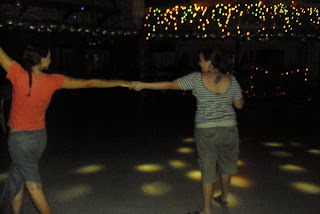 Nate and I were looking at the prices of beer at a local bar recently. Nate’s in Samoa for 3 months working for Kiva, a microfinance organization. He was asking about how things have changed since Group 81 arrived almost a year and a half ago. Samoa is rife with development. Cell phones are ubiquitous, foreign beer is showing up on more menus, and according to rumor, hi-speed Internet is supposed to get a lot cheaper in the next month or two. Hell, I can maintain a near daily blog. Samoa is bounding toward the future, full speed ahead. That being the case, experiences like the one we had at the Tropicana last night offer a window to what things may have been like before the developers showed up.

Fono, the Peace Corps’ Safety and Security Officer, moonlights as a lounge singer at a nightclub in Apia, the Tropicana. The club itself is a little off the figurative beaten path—in actuality, the path to get there is beaten, but not paved. It took a skillful taxi driver going at low speeds to get us there. Fono had taken some time off from his gig for personal reasons, and only recently has the show been back on. So K8, Briony, Phil, Koa, and I made the trek to catch the show last night. Fono and his band played from 8 to 10, a DJ was set to follow. We showed up right at 8, before the band started, and before most of the crowd showed up.

Much like RSA, the Tropicana is out of the way, and caters almost exclusively to locals. Rather than strobe lights or even a disco ball, the dance floor is strung with artfully (or inartfully?) placed Christmas lights. Patrons sat on austere metal folding chairs at sparse wooden folding tables. The walls were brightly painted, occasionally mix-matched, which made the whole building feel improvised and makeshift. All of these things combined to give the place an ambiance of authenticity and warmth. With the live band performing old favorites, the place seemed almost untouched by the passing of time.

The band put on a good show, and I’d had enough to drink to loosen up my dancing inhibitions. In fact, all five of us were on the dance floor for most of the two hours. Koa put in requests for Lionel Richie’s “Stuck on You” and the Dolly Parton/Kenny Rodgers duet, “Islands in the Stream,” both of which filled the dance floor.

There was a group of 3 older Samoan women who Koa and I ended up dancing with quite a bit during the course of the evening. We rotated through the group, sharing the love, giving the ladies a little thrill.

It’s not the kind of thing I could do every weekend, but as far as impromptu plans on a Friday night go, last night was great. I definitely want to make it back there before I leave.

I hope you’re enjoying your weekend. Pictures below. 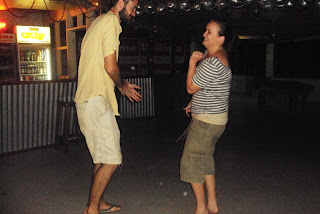 Phil and Briony on the dance floor. 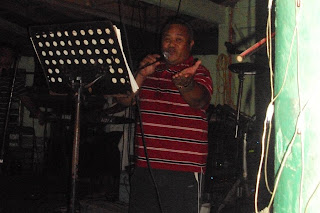 Fono at the mic. 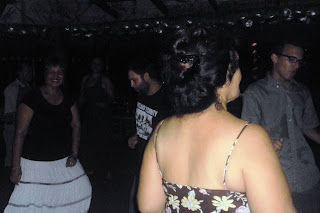 Koa, me, and the ladies. 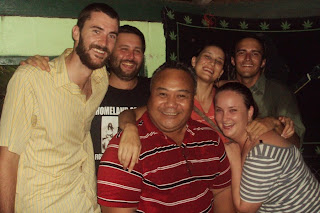 The 5 of us with Fono. Like a Burl Ives album cover.

"Fono" is a bloody legend.

Thousands of Samoans and visitors have grooved to his music. My memories are from the early 90's at the Kitano Hotel, before the cell phones and super highway of information.

I can still hear "we built this city, on rock n roll" ringing in my ears as we boogied til midnight most Saturday nights, before heading to Mt Vaea to finish the night before the cops show up.