First the Academy Awards (feel free to skip this section)... Overall, I’m happy. “Avatar” may be the technical revelation that only comes once every couple years, and that’s great, but I maintain it has no business winning the top awards without telling a good story. A good counterexample is Pixar. When “Toy Story” came out in the mid-1990s, it was an amazing step forward in cinematic arts—but it also had a poignant, clever story.

In any case, I was happy to see “The Hurt Locker” take Best Picture, Director, and Screenplay. The fact that it snaked the sound awards is even better.

I was happy to see Christoph Waltz win for “Inglorious Basterds”. It was too bad The Academy overlooked the movie in all other respects, but I guess some people just don’t get Quentin Tarantino. Some critics say it’s his best ever, and I can get on board with that. It’ll never be a pop cultural staple like “Pulp Fiction,” but as a piece of filmic literature, it’s great.

I thought the John Hughes tribute was great. I would still rank “Ferris Bueller’s Day Off” in my top 3 favorite movies of all time.

I was proud that I called “Up” for Best Score. Everything I read pointed to other favorites-to-win, but I called the underdog. It’s got that simple, great, happy, tragic melody line. It fits the movie like a glove. I called it. 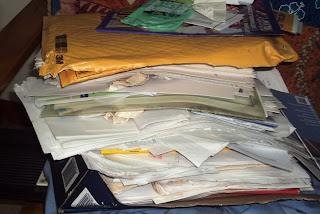 I had to install drivers on Thanpuii’s computer just before I watched the Oscars at Maengi’s house, and in similar conversa- tions, they both made the same observation: this seems to be the hottest year in Samoa they can remember. They both arrived in December 2001, so that’s pretty substantial.

In my first period class this past Wednesday, I was standing at the chalkboard at 8:00 a.m., and I could feel my body drenched in sweat. It rolled down my frontside and my backside and everywhere in between, and my clothes felt heavy on me as they absorbed what they could. It was gross. Later that day I talked to Blakey, and she reported having the same experience in her first period class. First period!

I bring all this up, one, to give you an idea of what we’re all going through here, and two, to give you an excuse for why I haven’t been doing anything for the past couple months. My house is in squalor. The trees outside are overgrown, and the inside has become a dumping ground.

Guests show up, and I have to move loads of dirty laundry to find sitting space. It’s embarrassing and gross, but until today my motivation has been rock bottom.

But this morning I needed to find a certain piece of paper to give a lady at church, and that finally tipped the scale.

I found I have stacks and stacks and stacks of out-of-date school stuff from last year, so I shed all that. And along with that, there was heaps of other stuff: old telephone bills and Peace Corps meeting agendas and draft syllabi and old notices from my pule and blah blah blah.

I also found:It was a productive day, and I made a little cash. The dirty laundry is still sitting on a dining room chair though. Call before you come, and I’ll move it. 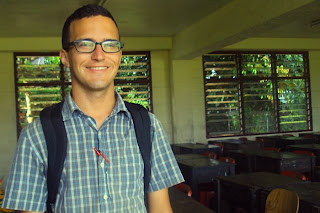 A teacher at my school borrowed my camera on Friday, and this picture of me was taken as a test shot. 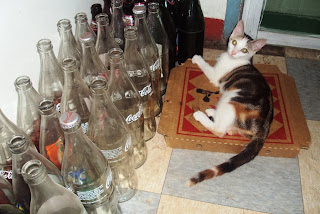 A couple months back, Jordan asked, "Why do cats like to sit on pizza boxes so much?" And lo and behold, Scout found a pizza box this week. 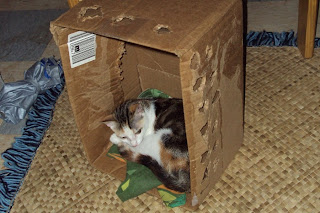 I took her to the de-sexing clinic in this box, which she hated. But turn it on its side, and she loves it. Whatever, Cat.

Hey Matt! I enjoyed reading about your Oscar picks.
I'm not super competitive generally, but I get really sucked into my friend's Oscar pool every year. I pulled 16/24 this year, which put me in a 7-way tie for 5th place (it's a big pool).
My personal best number-wise is 19/24 in 2009, but that was only good enough for 3rd place that year. My personal best performance-wise was in 2008 when I came in first place (with 17/24). It's a shining moment in my Oscar pool history! Hehe.
Sorry for the number overload. I just got excited to talk Oscar predictions. :o)

What are all those coke bottles for?