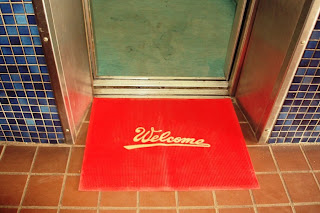 It’s a rare day in Samoa when I get to ride an elevator. In fact since I arrived, I’ve only been on two: the one in the American embassy, and the one in the John Williams building. I took the latter this morning to get up to the sixth floor for our Head-of-Department meeting. The elevator there is enough of a rarity that up until last year there was an attendant to guide people in pushing the buttons. At one point there were welcome mats in front of the elevator doors, and I’ve witnessed people inappropriately use the “open door” and “close door” buttons.

In any case, a weird thing happened when I stepped on this morning. For some reason I was immediately reminded of the elevator in San Francisco’s Westfield mall; the one in the Eastern end, on the bottom floor you enter from behind the Thai place in the food court. I’m not clear on why this elevator came to mind. I’ve certainly taken other elevators far more in my life. In fact, that mall didn’t open until a year after I moved to San Francisco. But it came to mind vividly, it brought on a warm, fond feeling, and that fondness almost immediately darkened to longing.

Emotionally I was caught off guard, and the elevator’s been on my mind all day.

Riding the Westfield elevator is a generic experience one could have in almost any public building. It’s certainly a nice elevator—spacious, clean, and well lit. It’s not too slow, and it’s got big placards that light up as you pass each floor. But on the whole, it’s unremarkable.

I have fond memories of the mall. It was a casual-but-slightly-fancy place to meet people for dinner. After I got laid off, I’d go up to the atrium on the 8th floor during the day, where I’d sit and read Newsweek. But nothing particularly noteworthy happened there—I don’t even have a slightly funny story to tell about the place.

My longing has nothing to do with place or sentimentality. I think I just miss my state of mind.

I wouldn’t call it carefree. During the period I rode that elevator, I had a corporate job, was laid off, desperately searched for a job, and eventually joined the Peace Corps. It was a strange, stressful time. But I wouldn’t call my state of mind strained or anxious either. After all, isn’t the point of reading Newsweek in an atrium or picking up Vietnamese takeout at Out the Door to relieve stress?

It was a place I’d go to relax and unwind, which is exactly what I’ve been lacking in Samoa recently. With the ever-changing school schedule and feeling cooped up in my house and missing out on crucial sleep during last Friday’s tsunami evacuation and feeling the general malaise of mid-service, I would love to ride the Westfield elevator. If I were in The States, it’s exactly what I’d do.

I guess you could call it homesickness, but I think it’s a little more nuanced. Sure, with our close of service slowly coming into focus, memories like today’s whet the feeling of going home. I imagine the pull of such memories will become stronger as the year progresses. But since the longing isn’t really one for a particular place, I think I just need to find the Samoan equivalent.

Which, incidentally, is not the elevator at the John Williams building. 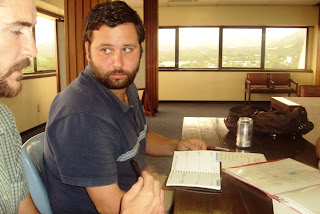 Koa brought out his day-planner during today's meeting. Phil in the foreground. 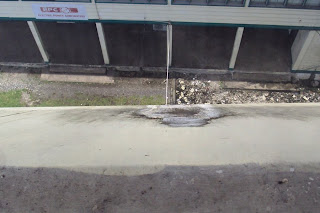 The Virgin Mary from above. 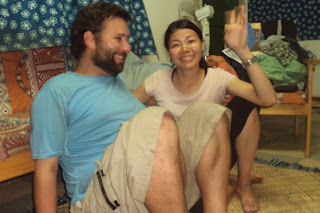 Koa and JICA volunteer Summer hung out at my house last night.

I used the John William's Building elevator once and once was enough for me. I took the stairs every other time I have been in that building. That is one rickety, scary elevator of death.

I think you should hop it to Savaii for a couple of nights, mix it up with touristas from NZ and have a gay old time.

That's what I would imagine I'll do on the weekends where I feel as if I need an escape from reality Samoa. (If I was working and living in Samoa.)