It was similar to a mistake I made my sophomore year of college. I had a crush on a girl, and in talking the two of us realized we’d never seen each other’s favorite movies. We watched hers first: “The Sound of Music” (That’s right. I grew up in Marlis’s house, and I never saw “The Sound of Music” in its entirety until college.). Then it came time to watch my favorite: “Ferris Bueller’s Day Off”. The girl, my crush, fell asleep. It was like punching my soul in the face. I’d gone too far out on a limb with one of my great loves, and I got burned.

In my English class today, I introduced the new song: “Hey Jude”. Yes, Koa taught his class “Let It Be,” but I’ve never been a big fan of that song. And yes, “Hey Jude” is pretty epic and probably a large pill for my kids to swallow, but I figure go big or go home, right?

I’d rank it in my top 5 favorite Beatle songs, which puts it pretty high in the running for one of my favorite songs of all time. And it doesn’t have much to do with taboo subjects like love and romance and heartbreak, or at least not overtly. We have about 6 weeks left in the term, which seems about enough time to make it to the na-na-na-nanana-na’s. So at the beginning of class today, I walked to the chalkboard and wrote out the lyrics to the first verse.

At first, my class was quiet and diligent enough. They copied down the words, some of them elaborately stylized the song’s title in their notebook. They kept it together for a little bit of the melody too. By this point we’ve worked out a system of call and respond, and they were willing participants today.

But soon things descended into giggles and goofiness. Perhaps the “Henry!” and “No Sam!” shouts in “Henry VIII” cast an air of silliness for any future singing we do in class. Or maybe the kids just don’t take me seriously. When volunteers get together, it’s a common complaint that since our methods of discipline aren’t as harsh as the other teachers’, and since our Samoan fluency is behind the students’, the classes we teach are seen as lax and are not taken seriously.

Now, yes, I like “Hey Jude,” and it annoyed me when the kids started to goof off, but perhaps I’ve framed this post poorly because I didn’t care so much about the “Hey Jude” aspect as much as the fact that I myself felt disrespected.

By that point in the lesson, we were going over what the words to the song meant, and I was just about to explain the line, ‘You were made to go out and get her.’ And so when I finally had the class’s attention, I asked who the word “her” was referring to. “Is this song about a girl? Is he trying to maua se teine?” I asked.

“No!” I came back. And then I went into this longwinded speech about how “her” is your life goals, your dreams, your ambitions. And how the song is all about reaching for those, even when times are lousy. And I referred them back to the journal entries they’d written about what they want to be when they grow up, and I went on about how the song is about keeping your eyes on the prize, about how being in 10.4 probably feels lousy compared to being in 10.3 and how it’s a wake-up call to remind them to keep their head in the game, and how it’s on them to take a sad song and make it better. Cheesy? Certainly. Relevant? I like to think so.

The class shut up after that—not because they’d been moved, but I think more because they realized they’d hit a nerve in me. And even though I don’t think it’s very effective to make such speeches, it felt kinda good and I was surprised by some of my own insights. Whatever. They were on task for the rest of the period.

I’m still pretty annoyed though. They’re going to do a lot of writing tomorrow. The English class equivalent of wind-sprints; you know, make them write until they throw up. 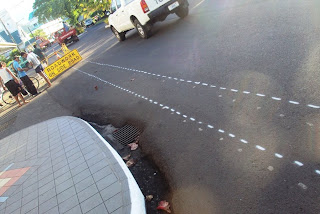 Things have been extra dusty along Beach Road lately where they've been digging up large chunks of the uta side of the street, the side away from the water, to lay purple pipe. 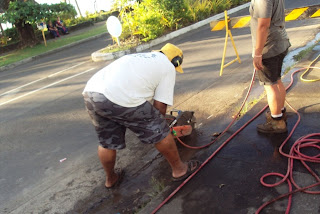 First the guy with the concrete-cutting saw moves through cutting along the dotted lines. 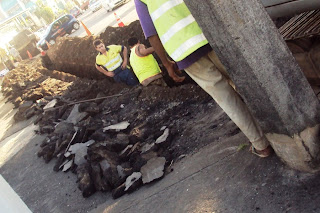 Then the big machine moves through that punches holes in the cement and then these guys come and stand inside the trench. 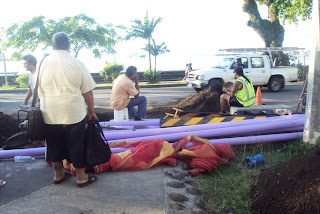 And these guys sit with the purple pipe.

wow you must really love that song. maybe "yellow submarine would have been a more suitable song choice. Anyhow you should have gone medevil of those kids and exercise your corporal punsihing right as a teacher in Samoa. But on the plus those pipes being laid in Apia look like fibre optic cables for broaband...cool eh.

So the guy we house sat for worked in the Ministry of Finance and did work related to water stuff. Anyway, he was telling us that some Asian country (I don't remember which one) was planning on installing a high-tech, high-pressure sewage system in Apia. Maybe this is it? Cale and I were always super excited about that idea, cause you know its gonna break and then high-pressure sewage is gonna shoot out of the streets of Apia in fountains of shit. Apia needs new sewers...oh wait...Apia needs sewers, but maybe we could start with a low-tech kind?

*laughs* I think the class were probably taken aback with how much you loved the song Matt when they went quiet.

Just give them the serious face if they disrespect you again! That should help.

Im an english teacher...and i love the part about - make em do wind sprints, write till they throw up!

I went to school here and trust me - we never had such interesting stuff in any of our english classes. And i think the best way to get students to understand how impt an idea/song/writing is - is to show them how passionately YOU feel about it. So...go Hey Jude!

The one thing to get the kids attention there is for a palagi to get reallllly mad. It's too I went to school there.