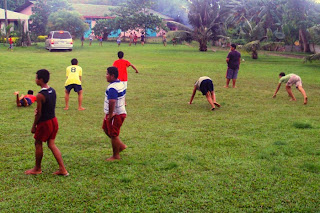 I hung out in the staffroom when the bell rang for first period this morning, waiting for the van load of teachers who would be heading to the SchoolC feedback meeting. I was reading my book when Taleni sidled up next to be with a stack of papers and a rugby ball in hand. Taleni is the head coach of the sixth grade rugby team, I am the assistant coach. He had been looking for me this morning to tell me he’s going to Savai’i for the rest of this week to attend a funeral and attend to subsequent obligations. So even though this is our first game of the season, and even though I remain perplexed by the rules of rugby, I’ll be flying solo coaching our team this Thursday. Great.

Later this evening while making peanut butter and jelly sandwiches for dinner, I listened to the Fresh Air interview with baseball hall-of-famers Bob Gibson and Reggie Jackson. Now as much as neither of my parents emotionally involve themselves in sports, I would still refer to ours as a Baseball Household. I rarely remember watching football growing up, but baseball had a presence in our house and even more so on the radio in the car.

We were enough of a Baseball Household that after the players’ strike of the mid-1990s, baseball’s absence was felt in our house. In fact, it was felt for years after because we were so annoyed by the whole thing. I don’t know if that makes us less of a baseball family or more of one.

In any case, listening to Bob Gibson and Reggie Jackson tonight made me miss baseball. And the juxtaposition between coaching a sport which I only vaguely understand and have little-to-no emotional investment versus completely missing out on a sport that I grew up with seems insane. I realize much of the Peace Corps is insane, but this seems more off than usual. It’s one thing to participate in cultural exchange; it’s quite another to be put in charge of the strange new pastime that’s completely supplanted everything that was once familiar.

I’ve asked for help, and hopefully someone will feel sorry for me enough to step in and straighten things out. I like to think I save begging for pity for dire situations, and I think this fits the bill.

On the other hand, it’s just a game, and God knows the boys know what to do. Mostly I just call their names so they know who should be on the field, and they’ll take care of the rest. For a coach, it certainly helps to be familiar with the ins and outs of the sport at hand, but I guess for one game, I can fake it.

It seems like sixth grade is a lot like Under 6s or Under 8s in soccer where you mostly put the kids on the field, throw the ball at them, and let them chase it for two halves. And then you have orange slices and Capri Sun afterwards. 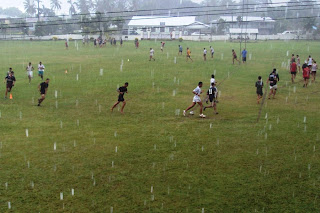 Older boys running in the rain. 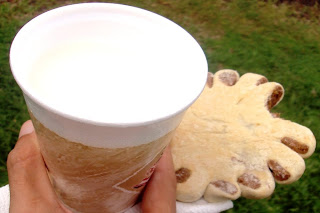 La'au Moli and Keke Saina during morning tea today. La'au Moli, literally Citrus Leaf, is a tea made from citrus leaves (duh). It tends to be served with lots of milk added. Keke Saina, or Chinese Cake, is a cookie with an onion-based paste in the center. It's not really similar at all, but I guess you could kind of think of it as a cousin to the onion bagel.
Posted by Matthew at 7:00 PM

One way to get out of doing rugby coaching is to screw up so royally that no one ever asks you to do it again. I swear that is what men do when it comes to laundry. They make sure they turn everything red, and shrink it to half it's original size, so the women never ask them to do it again. It is a conspiracy.