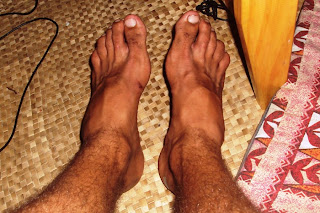 Very shortly after arriving in Samoa—less than a week, in fact—I wrote a post about how more than any other part of me, my feet pay the price of being here. Since then, my feet have risen to the occasion and fallen in line, bearing the brunt of the dirt and filth every day, weathering the elements as well as could hope. Things have gone swimmingly until about a week ago when, for whatever reason, things began to fall apart.

Just like breaking in a new pair of shoes, it’s not unusual for my feet to get some blisters after starting on a new pair of flip-flops. But things have been extra trying with my most recent Havaianas. My feet didn’t go from good to bad over night though; as with most things, it started with something small that has snowballed into something much worse. In this case it was a small blister on the top of my left foot, where the strap of my flip-flop rubbed too much against the skin. It’s a common problem, and I think the skin around that part of my foot has become thicker.

But for whatever reason, it’s taken a long time to heal. And then another blister developed on the bottom side of my second toe. The little peg that connects the strap to the sole rubbed off a patch of skin. I slapped a band-aid on it, and didn’t give it too much thought.

Do you ever marvel at how even the more distal parts of one side of your body end up doing the same thing as their counterparts on the opposite side? I think the first time I experienced it was in marathon training where if I felt a crick in my left knee, inevitably the pain would jump to my right knee as though it was a disease contagious among knees. In any case, the blister on my left foot inexplicably reproduced itself on my right foot in the exact same place.

Something seems wrong. Perhaps the unseasonable weather is causing things to be less humid than usual? Or perhaps because of the heat, I’ve spent too much time in front of the electric fan. Whatever the reason, dryness and subsequent friction are taking their toll on my feet.

In an attempt to give my toes a break, I wore a pair of reef-walking shoes on my walk into town yesterday. But, of course, the heels on those gave me blisters on the backs of my ankles. By the time I got into town, it felt like my poor ankles were on fire. I ended up folding down the backs and wearing the shoes like clogs for the walk home.

This afternoon I employed a different tack: I brought out the moisturizing lotion and cloaked my both my feet in a thick coat. I figured alleviating the dryness might eliminate the friction, and the strategy seems to have worked.

But still, my feet hurt.

I hope you’re well. Pictures will be posted tomorrow. 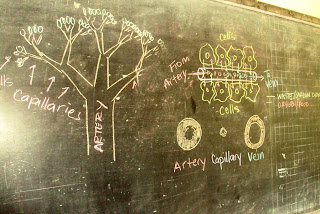 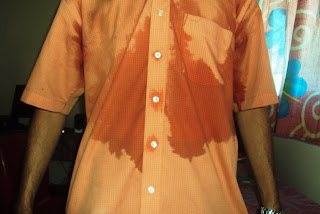 This is how sweaty I was after science this afternoon.

Lose the flippity flops and go uppity with the faux Birkenstock available from CCK or ChanMow in Apia.

It's not as durable (nor as costly) as the reals, but more comfort and protection for your feet. (you only have one pair of them)

A foot massage from Akenese and Keleme will help. When we were young, we gave our dad foot massages after his shower when he got back from the ma'umaga, which is 6 miles from our house. We also walked on his feet, so Keleme is a good size to walk on your feet.