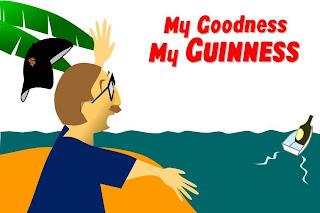 The story goes like this: Cale 79 calls Dylan 77 and tells him he’s been hearing a funny sound around his house, and he wants Dylan’s opinion on the matter. Dylan assents, and then Cale holds the phone out and Dylan hears a small, high-pitched PSHHHHHH immediately followed by a hollow popping sound. Dylan, of course, has no idea what the noise is, and Cale tells him, “Oh right. I know what it is. I just opened a Guinness.”

Guinness was one of the first imported beers sold at Farmer Joe, and it was a big deal when it first arrived on store shelves. Whether or not the above story is true, it provides anthropological evidence that, indeed, Guinness was sold in this country in the not-too-distant past. It’s the “hollow popping” that really proves the point. Guinness’s patented nitrogen capsule makes a funny noise when you open a can or bottle, and it gives the beer that authentic draught taste.

I spent the day looking for such a can or bottle. With Saint Patrick’s Day just around the corner, Guinness should be in season. In addition to enjoying the rich, smooth taste of Guinness, I’ve been dying to make Irish Car Bombs. An Irish Car Bomb involves dropping a half shot of Jameson Irish whiskey and a half shot of Bailey’s Irish Cream into a glass of Guinness and drinking the resulting concoction. The coffee taste in the Bailey’s combines with the chocolaty Guinness to create a perfect little drink. For those of you trying at home, drink up fast—the Bailey’s coagulates in seconds, and then you won’t want to drink it at all.

In any case, for the past year, the problem has been the Jameson. While there is a fair amount of whiskey for sale in Samoa, the Jameson plays an important part in the drink, and it’s not something you want to scrimp on. But going through duty free in Sydney, I remembered the Jameson. The last part of the equation was in place.

Until last night when Chris told me there’s no Guinness at Farmer Joe. I checked this morning. There’s not. There are a handful of other places that typically sell things of the Guinness ilk, and I checked out those places as well. Nada.

Oscar Picks
Below are my guesses on who will win at the Oscars tomorrow night. Once again, these are my guesses for who will win. They do not necessarily reflect my opinion of who should win. Feel free to post your guesses. All entries must be submitted by 8:30 p.m. EST / 12:30 p.m. Sydney Time. Winner gets a postcard. 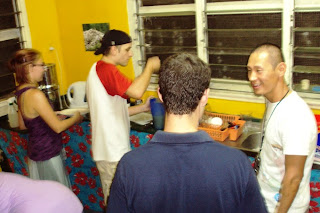 Last night was the Peace Corps/JICA dinner. One of the JICA volunteers is leaving, and it was another's birthday. A good time all around. 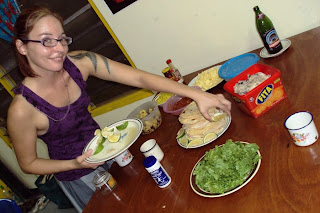 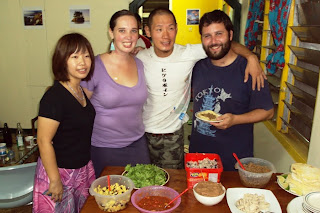 Posing with the food.
Posted by Matthew at 7:00 PM

You should know they story is true. You should also know that in his excitement to share the sound of Guinness with Dylan, Cale spilled a significant amount of Guinness all over. Party foul.

Rumor has it that one of the owners of the surf spot resort on Savaii is Irish and has a constant supply of Guinness imported. So you might still be able to make a car bomb.