Let's Not Do That Anymore

In high school I knew a girl who swore by a philosophy in which posited that any time you try something new, you are obligated to try it twice to either confirm your experience and/or dispel any part of the initial experience that was false. This philosophy, at least somewhat based in reason, seems logical enough, and I’ve employed it on quite a few occasions in Samoa. For example, there’s a restaurant in town where some Peace Corps love to eat while there in town. Tried it. Didn’t like it. Gave it the benefit of the doubt. Tried it again. Still wasn’t impressed. Done and done.

But on some occasions, the first experience is so jarring and wrong, that one can forego the whole doing it again thing. That was my experience in my English class this morning.

It is common among teachers at my school to write heaps of text on the chalkboard and then have the students spend the period copying it all down. For certain aspects of computer studies, I felt like I could justify this method to a certain extent. For one thing, my school doesn’t have the resources to make lots of copies of handouts. Also, the physical act of writing helps the brain commit it to memory. So, for example, when I’d draw out all of the Microsoft Word icons they were responsible for knowing, and then list the definitions alongside, I had no problem making the kids spend a good half hour drawing the pictures and copying the notes.

But in English, I've always been a little weary of the practice. But the plan was to read a short story together as a class, and since there aren’t enough copies of the story to go around, I figured I’d write the story on the board and have them copy it. Bad idea.

My first problem was choice of story—I decided to use the one from the Year 10 textbook. It should be reputable, right? Wrong. This story had words that would have perplexed an American twelfth grader, let alone my kids who don’t speak English natively. The story, written by a Samoan, uses words like “austere” and “implicitly” and “swathes” and “profusely” and “defiant”, not even close to my kids’ English vocabulary.

I wrote the first two paragraphs on the board. They were both quite long, and even though I wrote fairly small, they were all I could fit. Many students, who by this age are quite proficient at blindly copying the board, actually kept up pretty well. Others, understandably, got that glazed-over look in their eye.

The first two paragraphs set the scene: A Samoan family living in New Zealand. The mom constantly picks the red roses that grow in front of their house, and she and the dad sing in the late afternoons before taking the flowers to church.

After my kids labored for most of the period, I decided to ask some of the critical thinking questions the textbook suggests. “How do we know the people in the story live in New Zealand?” I asked.

“Whoa,” I said. The words ‘Samoa’ and ‘Samoan’ appear in these first two paragraphs several times. “Are the people in the story palagi?” I ask the entire class.

“Yes!” They shout back quickly and in unison.

“Afakasi?” Half white? The same kid in the front row half states, half asks.

Finally a girl in the second row: “They’re Samoan?” The two paragraphs are dripping with nostalgia for Mother Samoa, and my kids aren’t getting a hint of it. It’s way over their heads.

I will never spend another period writing English on the board for my kids to blindly copy, and we won’t be reading any more snooty stories from the textbook. Done and done. 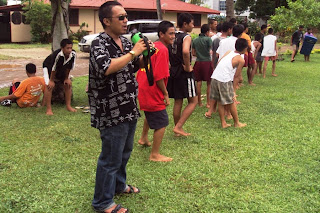 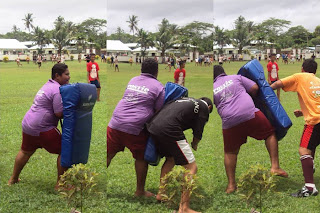 The kids loved practicing plowing into each other. 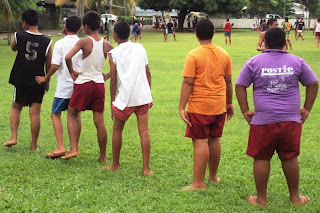 Boys waiting in line.
Posted by Matthew at 7:00 PM

It's dangerous to read your blog at work. I laugh out loud and then my staff ask why and I can't quite capture it. Then they all have to read the blog and we get no Y work done! Great writing.