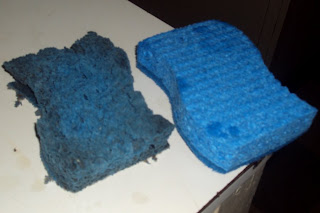 The packing list the Peace Corps sends future volunteers is 4 pages long, single-spaced. It goes through the necessities and the optional items and suggests helpful reminders. In my opinion, the most peculiar item is where it specifically calls out there are no dried apricots in Samoa, and if you’re someone who really likes dried apricots, you should bring your own healthy supply. As strange as that bullet is, the wisdom of that “healthy supply” part is applicable across the board. There are certain things you can’t buy here, so it’s good to bring a bunch.

The packing list goes into more detail of the “healthy supply” rule when discussing underwear. It suggests volunteers bring extra pairs of underwear sealed in a Zip-loc bag, and then after a year, once the volunteer’s underwear has effectively disintegrated in Samoa’s hellishly humid climate, s/he can open the Zip-loc bag and bask in the firm embrace of preserved elastic.

I followed this advice. I sealed a bunch of underwear in a large freezer-sized Zip-loc bag. I have an extra pair of glasses (thick-rimmed, of course) encased in plastic, and I have an assortment of other random supplies (e.g. dish sponges) still in shrink wrap.

But now that I’ve arrived at mid-service, now that I’m looking at less than a year left in Samoa, part of me is hesitant to open any of these things. My reasons are twofold: I think I enjoy looking forward to opening the new things more than I will enjoy actually opening them, and I’m hesitant to start working without a backup. Let’s look at these one by one.

The current glasses I wear are a little decrepit. The effect of 17 months of Samoan humidity, occasionally wearing them while I climb a waterfall or lounge in the water on the beach, has been substantial. The anti-reflective coding has been slowly flaking off so if the light hits them just right, you can see splotches of light where the holes are. I have a brand new pair that would allow pristine, untainted sight—for a while. Soon enough, they’d start to wilt and crack, and then I’d have 4 or 5 months left with 2 pairs of crappy glasses.

And then there’s the second issue. When Phil and Koa visited for a teacher meeting back in mid-February, they were appalled by my kitchen sponge. It was frail, and if you watched certain dishes, little sponge-bits would flake off and swim around the sink before going down the drain. It was flimsy and tired. Now, as I said, I had a fresh sponge wrapped in shrink wrap in my house, waiting to be called up to the majors. But I liked having him there. Now that I’ve opened the sponge, I’m working without a net. This a Scotch-Brite No Scratch Multi Purpose sponge. And when it goes, what will I have left?

Please note this isn’t an indirect way of begging you to send me sponges. I can buy a cheap sponge here that will do the job fine. And even if you sent one, I’d probably just keep it in the packaging until it’s time to move out and then I’ll feel bad. I won’t ever be sponge-less, but I like knowing there’s a back-up.

I guess the situation is comparable to the same calculus one usually does when preparing to go on vacation or a long trip. Should you buy a gallon of milk if you’re leaving in 5 days? Should you buy a half gallon? Maybe you can forego cereal and just have pop tarts for breakfast, and then you won’t have to buy any milk at all.

It’s like that. Except my big trip is 9 months away. 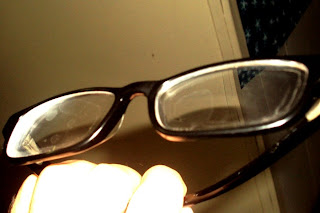 My glasses. It's a little difficult to see the anti-reflective blotches. They look like little circles on the lenses. 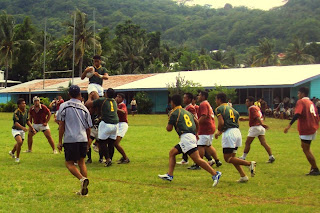 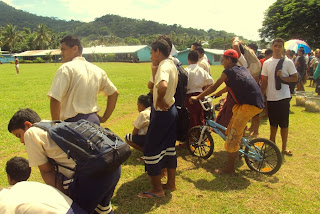 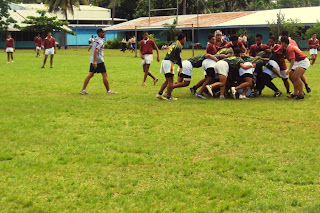 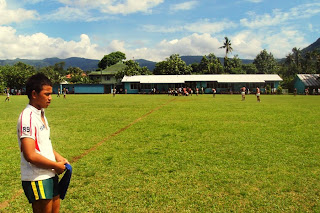 for the new glasses- you could order a cheap (but totally decent!) backup pair from zennioptical.com. You can get glasses, including lenses/frames/coatings for about $20 (or even less!). It's kind of ridiculously awesome! Just saying- at least you'd have a backup pair. :)

If that's the sponge you are currently using, I think you should live on the edge and break out your new one.
'Just curious, at what point will you start using all your back-up supplies?

you are so spongeworthy. please open that sponge. and get a backup one in samoa if that should put your mind at ease.

Ok...spring for a new sponge! I'll send you one. Tonya even called me to tell me how disturbed she was by your sponge (before I saw your post). I love your blog but I definitely believe that you are spongeworthy...NEW spongeworthy.