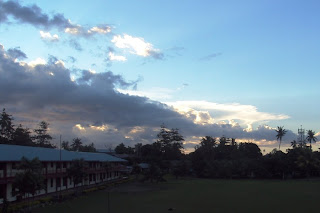 It’s widely agreed that the New York City heat is a character in itself in Spike Lee’s “Do the Right Thing.” Sure, it serves as a metaphor for racial tension, but it’s such a driving source and a constant battle for the characters, it’s no wonder things get out of hand. I’m not saying racial tension is running high in Samoa, but with this unrelenting heat, I’m barely hanging on to my sanity. This morning as I brushed my teeth, I had to stop to wipe the sweat off my forehead. I’m not talking about a little glisten; I’m talking about beads of sweat, some of them rolling down my temples. It’s maddening, and it sets the tone for everything else. It’s hard to move, hard to teach, hard to get through the day. Next week is the unofficial start of the dryer, cooler season. I hope it comes through. Here are some other odds and ends from the week:
That’s all I got for this week. I hope you’re well. Pictures below. 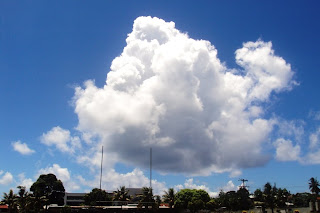 Despite the heat, the good clouds are still showing up as they did last March/April. I noticed this in the middle of fifth period, so I walked outside and took a picture. "That's good clouding." 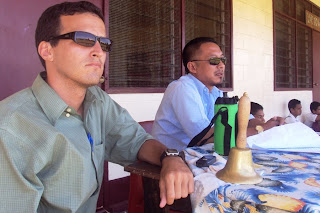 Me and Apong keeping time and scoring the rugby game. Don't we almost look like we know what's going on? 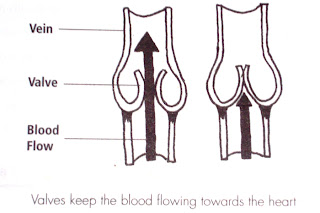 This diagram is in the Year 9 text book, and it taught me a valuable lesson about the merits of not blindly following the text book. In fact, I think this might only be in the text book as a sort of dare. We, the text book authors, dare you to show this diagram to your class. Yeah. It's a "valve". Sure. 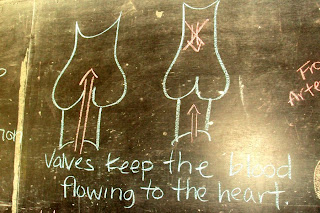 So like an idiot, I blithely draw the diagram on the board. And my poor adolescent year 9s, trying so hard to be respectful, cannot contain themselves. Only then did I realize how incredibly dirty and suggestive this diagram is. And it's so dirty and so suggestive on so many levels. In the end, all I could do was laugh with them. Oops. Never trust the text book.
Posted by Matthew at 8:00 PM

I can tell I am old, and have been in the medical profession too long. The first thing I thought was a vein, with it's one way valve, never even thought of anything else. Takes kids to point out something else. You must be getting old too!!!!

nice "valves" ha. anyway, i thought you read the odyssey in middle school (or was it freshman year) like I did and I thought it was a re-read for you. I guess not. The Odyssey is a once in a lifetime time read anyway.

I can hear the giggling in the background. Can you say colonscopy???