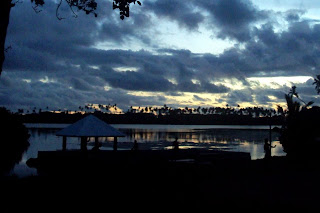 We’re on the verge of finishing week 7 out of the 15 in the first term of the school year. Term one is the longest and tends to be the most formal and straight-laced time of the school year. With after school sports, I feel like working at school has been almost non-stop lately, and I’ve spent much time this week calculating the number of school days until Easter break. Three weeks from today. I can’t wait. Here are some other odds and ends from the week:
That’s all I got for this week. I hope you’re well. My camera’s battery died right at the beginning of today’s rugby match, so no pictures today. Sorry.
Posted by Matthew at 7:00 PM

Okay, so here's a comment. I hear your birthday is coming up. Let me be the first to say Happy Birthday Matt. 'Hope its a real good one.

You should know that before there was Guinness in Samoa, Cale too was planning an impromptu trip to American Samoa. He cancelled when he learned there was no Guinness or BBQ ribs there.

Also, I like My Goodness, My Guinness. However, I feel like there is something about the cartoon mustache that makes you look a little creepy and old. Like the 50 year old guy that hangs around at little league games even though he doesnt have any kids.

Happy Birthday! I hope you are having a great day!! Wish we could celebrate our birthdays together this year. You and Katie could compare notes on Irish Car Bombs. After her trip to Ireland, she is a certified Guinness something or other.

Happy Birthday Matthew L. I guess I'll have to settle for being the second one to wish you that. I remember that several PCVs have a birthday around this time. Happy birthday to all of you. Shoot - I didn't see your aunt's comment. Now I'm number three!

I think the only limit for checking alcohol is related to proof -- must be under 150, if I remember correctly. Not sure how that applies to international travel, though.

I read every day & I thoroughly enjoy your posts, but I often can't think of clever enough things to say. I'll work on it.

HAPPY BIRTHDAY MATTCHOO! I hope you have a good day & a great weekend! I love you, you're my brother.

Happy Birthday! I hope a you celebrate with the view of the southern cross. Be safe!

Happy Happy Birthday Matt! Hope you are having a great day celebrating birthday #? 28? I remember when your parents were 28!! Of course your dad is the oldest and always will be....
I have enjoyed reading your blog and following your experiences. Hesitated to comment cuz wasn't sure you would remember who I am. But I figure on your birthday, when you are away from home, all greetings are nice to get.
Hugs from sunny California!

Matthew, Happy Birthday! I love you with my whole heart. Love, Annie

Happy Birthday Matt! Wish we were there to help you celebrate. Have a good one.

Happy Birthday! and although I read your posts on an almost daily basis, I only comment when I feel like I have something fun to say. hey how about you turn your coke bottle money into a new backup sponge!