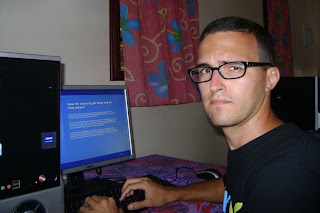 Teaching is a peculiar profession. Teachers spend their work day separated from their peers and they spend hours after work preparing for hours during work the next day and they’re a little repressed since they’re constantly on their best behavior. Even in Samoa, teacher parties are a little crazy because it’s people who never let their hair down letting their hair down. In any case, one unexplored area of teacher weirdness is the way in which, more than other profession I’d say, they operate on a yearly scale, which makes things feel almost geological at times.

Sure, working in the corporate world there are annual reports and analysts continually compare the current year’s data with data from years past. But with teaching, with each year there’s a new class of students each year with unique personalities, both individually and collectively.

Growing up, we noticed this, and Liam and I still have conversations about the 2000 kids versus the 99ers. My senior English teacher, who I still talk to occasionally refers to us as “The lazy kids who were too smart for your own good”. Maengi does this same thing with different classes at my school here in Samoa. “2007 was a good year,” she’ll say. “But, oooh, 2006. They were so hard to manage.”

This also shows up in lesson planning and polishing. I’m teaching my new year 13s databases right now, and I have notes that I wrote to myself last year about what worked and what didn’t work, and it’s weird because I vaguely remember, but a year is such a long time to connect from one point to the next. It’s like drawing a picture by connecting the dots where every 2 dots are separated by an entire piece of paper.

It’s such a slow progression, it really feels like the formation of a mountain range or the slow movement of a glacier.

And now I’m constantly being singled out by other teachers because I this is my last year. On two separate occasions today, I was confronted about this being my last year and what is the school going to do next year? It seems like the kind of questions and sentiments that would spring up toward the end of the year, but because education takes such a macro view of the year, I’m already at my endpoint, even though I’ve got another 8.5 months.

On one hand, it feels like senior year of college. I remember talking to some freshmen on my floor rather callously about how I’d be gone the following year. They were slightly offended, and I had to explain that the idea of leaving was something I was constantly aware of, every minute of every day.

On the other hand, it feels like I’m resigning my position, and I’ve given an amazingly long amount of notice, and now I’m in that period where I’m still expected to be working, but everyone knows I’m leaving. And I’ll simply be in this weird nether-state for another 8 months. Hooray. 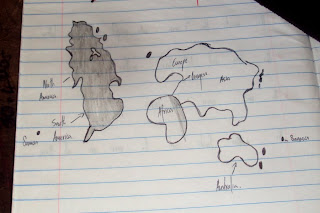 My students asked where Greece is, so I drew a clumsy world map on the board. When I asked me kids to identify "Africa," they called it "East America." So then I got cranky and labeled the continents and told them to copy it. So then I saw the way this kid had copied it down, and I think the whole thing may have done more harm than good.

This post only went up late because of a bug in Blogger's system. I wrote it in full and on time. I recognize that doesn't always happen, but it's more frustrating when I'm not responsible for a post going up late. I hope you're well.

Excuses, excuses . . . Don't you know that when your post is last, your mother worries? Now I have Phil's bus accident to think about with all the other catastrophes that run through my mind. I'm relieved to read that you're okay!