Why Must I Work with Teenagers in Love? 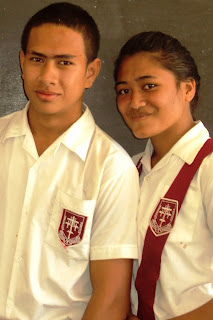 I’m not sought out for relationship advice very often. This was true in The States, and it’s even more true here. Maengi, on occasion, plays the role of undercover guidance councilor, helping students talk through problems with significant others. But something about me tells people to look elsewhere for such advice. The Love Doctor I am not, and everyone seems to have received the memo.

But then today I got a rare glimpse into the discreet social lives of students—albeit ones that graduated last year. One of the Year 13s from last year—let’s call her... Ruta—came by this afternoon to get help on her University-level computer studies homework. Ruta wasn’t in my class year, but she’s quite the overachiever and went out of her way to make friends with me so she could use the computer lab to type of English essays and such.

In any case, this computer class is the first she’s ever taken, so I help her out with some pretty basic Microsoft Word stuff. We finish, and it turns out she has no means of transporting the files. So I offer to lend her a flash drive from my house.

So walking to my house she gets to talking about all the kids from last year and how many of them are at the National University of Samoa (NUS) now, and how friendship dynamics have changed. She tells me about Mira and Sinaumea and Marie and then she gets to Epi (name changed, of course), and she starts to laugh so hard, she can barely speak.

“She was going out with this boy,” she laughs. “And he broke up with her. And then.... She CRIED!” She laughs and laughs. I’m caught offguard. This story is sad. But then she clarified the joke. “I can’t believe she would cry over a BOY.”

“Ruta,” I say. “That’s so sad. It’s always rough when someone breaks up with you.”

“Yeah, right,” she retorts matter-of-factly. “I will never cry over a boy. I’ll cry for my mom. That’s it.”

“Okay,” I shrug, not wanting to argue.

In the Peace Corps, we talk about relationships between students a fair amount. They’re entertaining because, for the most part, they’re very VERY hush-hush. Romantic gestures and public displays of affection are taboo in Samoa. Even older and/or married couples don’t kiss or hug or even hold hands in public. At the cinema, you can hear angry audience members tsk during kissing scenes.

So the adolescents I see every day are faced with a difficult choice: obey cultural norms, or obey your hormones. The result is an awkward, covert dance, that can sometimes come across as naïve or overly dramatic. Yes. I just described the life of every young adolescent, but here it takes on a special flavor.

Boys and girls alike tend to be quick using the phrase “I love you.” And yet even the two in the relationship tend to find the entire thing laughable just their peers. It’s incredibly serious, and it’s not serious at all. And the kids like poor Epi don’t know what to do with themselves.

And poor Ruta, at 18, is still adamant she’ll never cry over a boy. Let me know how that goes. 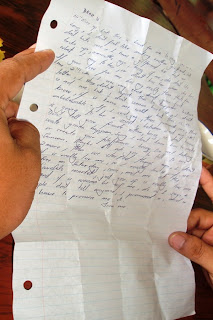 This is refried from September, but it's pretty funny and it illustrates my point perfectly, so I thought I'd bring it back out. The letter above was passed around the staff room during Interval. Transcript below:

DEAR U Hi! Wazz up. Luk this is hard for me to say yes or no becoz, I don't feel like making another girlfriend, but don't hate me, I have a girlfriend b4 but we broke up, 2 months ago, becoz of me, she don't like what I say to her, or don't kiss her when she live. If your love for me has any realty then that's for me 2!!! Um, I was very shock about your first letter, I really[?] didn't epect this to happen betwe u nd me. Luk I don't wanna hurt u, I don't know, if u know me well but this is so unbelievable. If I said yes, then promised me this is going to be a secret, between u nd me ok! Don't tell your friends either, becoz we don't know wate gonna happen. Sorry I dont know how to make or create your folafilaava [no idea what he means], becoz I'm not taking [talking?] Samoan. Maybe I'll ask you to talk to me 2maro, then we started things up, I don't if u really luv me, or I really luv u if ur free on Saturday, come, met me at the Paualalo market, just you. If u really luv me and if u wanna be wif me, do as I say. K plz don't tell anyone, I promised u, and u have to promise me ok. From me.

That is a good line.."The Love Doctor I am not, and everyone seems to have received the memo."
You won't be looking to replace Dear Abby as a way to utilize your writing skills in the future we can presume.

When The popular comment layout is common, so it is easily recognized scanning to post a comment. If the comment section is in a different format, then I am going to spend more time trying to decipher what everything means.