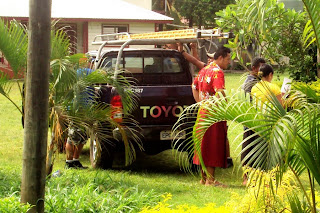 It was an urgent knock. I was laying on my couch at the time, and the clatter of the knock made me spring to my feet. The cat has been increasingly curious about the outdoors lately, so I grabbed her to keep her inside, as I scrambled across the living room. I opened the door and saw a large man wearing an fluorescent orange vest stamped with the initials of the Electric Power Company. “You live here?” he asked me. I nodded. “Good,” he said. “We’re shutting off your power until you pay your electric bill.”

I was only for a moment, and then realizing I was essentially powerless in the situation (no pun intended), I started to laugh. “You’re shutting off our power?” I repeated. “When are you doing this?”

“Right now,” the man said, gesturing to his truck, where I saw a man with a hard hat pulling out an extendable ladder preparing to scale the electricity pole outside my house. “Do you know who lives here?” he started knocking on Maengi’s door.

“I don’t know. You’re turning off our power right now?” The guy was clearly annoyed I wouldn’t identify my neighbor, and he didn’t seem too interested in going over the details of why he was shutting off the electricity. So I left the guy standing at Maengi’s door and went back into my house.

My laptop’s battery ain’t what it used to be, and I was working on my drawing contest entry, so I saved and shut down. By then, Maengi had come home to find the man up the pole.

“This is very frustrating,” Maengi said to me when I got back outside.

See, in return for our efforts, the school and its parent organization pay for our electricity. In gaining a Peace Corps (and 2 missionaries), the school agrees to provide housing and water and electricity, but for some reason, they waited until this morning to pay the bill, which didn’t leave enough time for the dispatcher to call this guy off.

And this guy had the self-righteousness of one of those Repo guys from TV. He knew that we were bad for not paying our bill, and he had no interest in listening to reason. So Maengi and I went back to our houses. The fan was dead. The lights were out. The computer’s battery indicator light was on.

So one by one, we complained our way up the chain of command. First our pule, then the main office, then the Treasurer. Maengi’s lived here for 8 years, so she knows a thing or two about navigating the system, and after not too long, we had guarantees from several people that our power would be back on today.

When I left to run some errands at 3:30 this afternoon, the power was still off, and I’d grown skeptical of its coming back on before tomorrow. I had flashes of reading a book by candlelight and sitting in the dark trying to make music blowing over the top of a Coke bottle.

But, sure enough, when I got home around 5:30, the cat was sitting in front of the electric fan, feeling the cool breeze.

Just another day in Samoa. 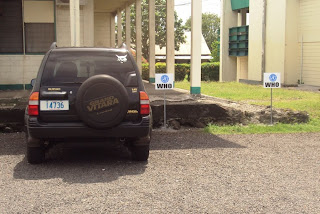 but i wanted a blog about you blowing music over a coke bottle! j/k i'm glad you have your power back on.

Driving up your engagement metrics --

WHO is in charge of parking!?!