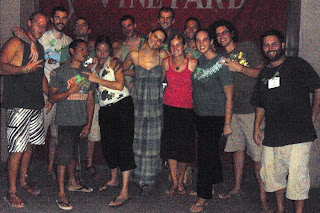 We are smug. We are pompous and proud and totally impressed with ourselves. And if there’s one topic of conversation that we can all speak about passionately, it’s one in which we try to understand why we’re so amazing. And in situations like yesterday’s, that conversation becomes inevitable, and while Group 81tries to fathom its own glory, everyone else rolls their eyes and waits for the love fest to be over.

As much as Samoa is a tiny country and as much as modern transportation and technology allow any volunteer to travel to any other volunteer’s site within a single day, it’s still extremely rare to have an entire group gathered in one spot. In fact, after training, for most groups there are essentially only 5 or 6 more times every single person in the group will be in the same place at the same time, and all of those are Peace Corps functions where attendance is mandatory. Getting everyone together for a casual occasion is rare, and for some groups nearly impossible.

But self-satisfied, too-cool-for-school Group 81 breaks the mold. A couple volunteers got together to celebrate St. Patrick’s Day yesterday, and once Erin showed up, we looked around and all 13 members of group 81 were present.

So in addition to having everyone still here, we are all also fairly likely to show up to events like yesterday’s. We are all social enough butterflies to come and hang out with volunteers en masse where we can have obnoxious Group 81 love fests and alienate everyone else who showed up.

One could argue that the social personalities provide good reason for why we’re all still here—perhaps group 81’s sociability contributes to its completeness. I’ve always felt like we’re in the longest game of chicken ever, and no one’s quit yet because no one wants to be the first the back down. See? I’ve seduced the post into a conversation about why Group 81 is so amazing. Tricky how we do that, huh?

I’m not trying to be ironic or clever by talking about how obnoxious we can be. We most certainly are that obnoxious, and after a year and a half, we’ve learned to tone things down. Sort of. Each of us has caught enough flack for our self-love that we know we should keep such talk amongst ourselves. In the family.

Actually, we weren’t very obnoxious at all yesterday. Erin got there, we realized what was up, we snapped a couple photos, and we went back to the party. We've become so humble. We're awesome. 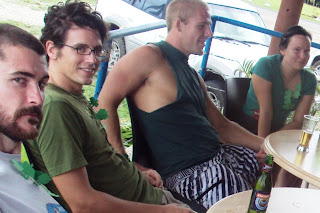 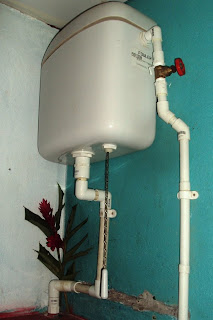 I just re-watched The Godfather, and the toilet at The Yacht Club is suddenly much more foreboding. You just get that feeling that Abe Vigoda just might have hid a pistol behind it. 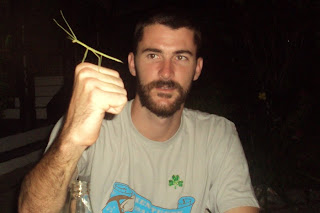 The waitress last night brought over this bug, which she called a sei. She said they're lucky. 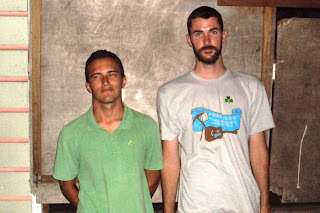 Phil and I are having a drawing contest in which each of us must reproduce the image above using Microsoft Paint. Once the entries are ready, I'll post them too.

Happy B'lated birthday, Hope you had a great time. The bug is not sei it's Se. Keep up the good work.

Way to go, Group 81! You should be proud. Great picture.

You are blessed! What a great group!!

Thanks for the birthday wishes. Miss you.

what a group you have, congrats!!! It's good to have someone like Blakey in your group, but maybe it you are all humble people.