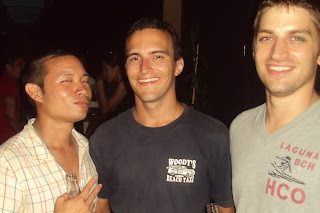 Phil, Dan, and I breakfasted at the Aggie Grey’s breakfast buffet this morning. It’s $25, which is a little more expensive than any of the breakfast places in town, but it’s all-you-can-eat and therefore quite a deal. Without getting into any specifics in regard to last night (Supy, me, and Joey above), suffice it to say I had a headache this morning, and a square nutritious meal was just what the doctor ordered.

Phil told a story about how he taught his kids about Uninterruptible Power Supplies by comparing them to Jesus. Uninterruptible Power Supplies are a bit like surge protectors on steroids—they have a battery inside that allows the computer to stay on when the power goes out or becomes unsteady, and they also absorb any power surge or spike. Of course, if your UPS does absorb such an impact, it dies, but the computer lives. It dies so the computer might live. The metaphor kind of invites itself. And in the country, you can do no wrong with Jesus. "You know how Jesus saved us? Well that’s what a UPS does for a computer," Phil recounted his lecture with a smile.

Dan told a story about saving a dolphin. Some boys from his village came running up to him calling, “Malie! Malie!” Shark! Shark! They wanted him to come and see. As it turned out, the shark was actually a dolphin, and it was stuck in a small hole less than a meter deep. It had become stuck when the tide went out. So Dan employed two trusted year 10s to help him hoist the dolphin out of the hole, and then had the boys carry it out to the deeper part of the reef. When the boys returned, he asked if they did it, and they said yes, and when he asked what the dolphin did when they let it go, they said it swam away. “I saved a dolphin,” Dan told us triumphantly. “I totally have good dolphin karma now.”

I had a full plate of bacon. Just kidding.

Short post today, but you know, things are busy this weekend. I hope you’re well.
Posted by Matthew at 7:00 PM

At least in Samoa I don't have to worry about you drinking and driving! I hope you had a fun birthday. Still waiting for pictures from Friday . . .

so.... any food pictures from the all you can eat breakfast?